Tears for My Father; Enjoying the Moment

I am standing on the balcony of my father’s home, looking out on the hillside in the back. There are pathways lined with stones that he has dug out of the stony soil over the 30 years of living here. Countless stones. At 92 he no longer digs them out. I’m sure he would if he could, my Sisyphus of a father. For what sins has he atoned? Was it the disowning of his sons, of me and my older brother Frank? Tears fall down my cheek.

Yama strolls up behind me.

YAMA: Why the tears? 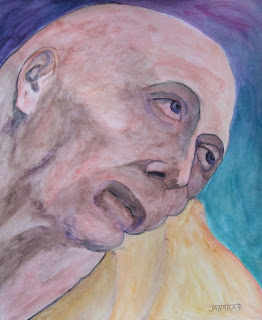 DISCIPLE: I’m not sure. I do not know if they are tears for all the years my father and I were asunder. Or tears of joy that he has turned into a much softer and kinder human being, who actually says that he loves me. Maybe it is a mixture of both, grieving for the lost time of affections we could have shared and knowing any moment can be his last.

YAMA: Are you enjoying the tears?

DISCIPLE: Yes . . . and no. It is what it is. I guess. But there is a voice inside my head that says that to cry over something that is past or of something yet happened, is ignorance.

YAMA: Ahh, the ego, wrapped in the guise of spiritual “shoulds.” Here the ego shows how clever it is by speaking the truth and hiding behind it; while its real intentions is to stay alive and in control by the use of guilt.

DISCIPLE: Please elaborate, Yama, I do not understand. Truly I am acting childishly. I know the truth of living in the Present, the Now. To do otherwise goes against all I have been taught. All that I know.

YAMA: In the Present you have tears, but your mind is judging the tears as wrong. You are spiritual, the ego hisses, you are supposed to be enlightened. And here you are crying like the rest of humanity. Like the rest of the herd. You are nothing but a fake. And it whispers underneath the sobs: see it’s all been a waste of time. You are no closer to God than when you first started. You are just a body and I reside in it, helping you to get the best out of life, protecting you against all the many fearful things that can hurt you and your family.

I fall to my knees, holding my head in my hands as I can now hear that voice inside screaming at me.

DISCIPLE: Because it is crushing my head. It feels like my head is going to explode!

YAMA: Now let me ask you, who is being hurt by whom? Is it the little notion of the separated self, the ego, that appears to be hurting? Or is it the Infinite Self, That which is one with All That Is?

As the answer dawned upon me the pounding in the head began to cease some. And the response came quietly out of me.

DISCIPLE: It has to be the ego.

YAMA: And is it the Self, always at Peace, always certain in its knowledge that there is nothing to fear outside itself, that is the essence of Love, that is attacking? Or is it the ego with one of its multitudes of fear-instilling blades?

The pounding stopped even more.

DISCIPLE: Well, it must be the ego again. For why would the Self do something to cause itself pain?

YAMA: Exactly. The ego is playing its favorite game of attack and defend, of victimizer and victim. But you are neither. Just watch. Let the ego ramble on with its two voices. And be aware of That which quietly observes, not judging. Not demanding silence. But which is Silence itself.

I closed my eyes. My breath began to slow. As my breath slowed I no longer engaged in the discordant thoughts. No longer identifying with them, they began to fade, until there was nothing but Silence.

And the tears came. Unbidden. Not stopped. Not judged. Not touching the Silence. And without judgment there was a joy from the Heart. And that joy spread and covered my father in gratitude for who he is and the miracle that lifted him outside of the hardened shell, to be a loving being on the threshold of no longer appearing to have a physical body.

Then my eyes opened, and Yama was gone. The tears disappeared. And I continued my day with my father.
Posted by Triliving--Celebrating Truth, Beauty and Goodness at 3:16 PM