Amidst All the Madness, All is Well

I sit in front of my computer, looking at the news, shaking my head. Another shooting of police officers, and this in response to the many shootings by white officers of black men. Yama appears at my shoulder and scans the headlines.

Yama: So what’s new in the world?

Disciple: Another shooting. The racial tension in this nation is going to tear this country in two I’m afraid. And then we have the threat of having a president who is so divisive, who speaks without thinking, playing on people’s fears (especially those of white male) and who is one of the most egotistical people I have ever seen. And then there is all the terrorist attacks that are happening around the world from Islamic extremists who are martyring themselves and taking out large groups of innocent people.

Yama: So what’s new? Nothing you have said is new. All of this has been playing out throughout the specter of time.

Disciple: Okay, anyone who has any sense of history could not disagree with you. But aren’t we more evolved? Are we not becoming more unified as we become more of a global body of humanity? At least we should be.

Yama: Ahh, expectations! Expectations are the slayers of what is. These events are just a few infinitesimal happenings on a stage so vast that the mind cannot comprehend. And because your mind does not reach out beyond the body’s senses, it focuses on little happenings to make sense out of it all, so it can rest on its reassuring cushions of judgment.

Disciple: How can you say these are little happenings? Say that to the victims, to the families of those killed! 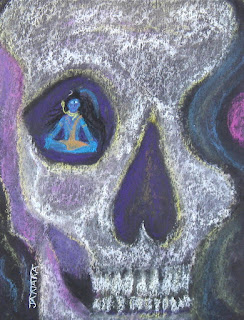 Yama: If they were wanting the Truth, if they were ready to awaken from their nightmare they call reality, I would. But since most are not, and I was in my guise of a human as I am now, and not in my role of death, I would console them in their grief. However, you have called me into your awareness in your cry to awaken from your nightmare of bodily consciousness, so I am speaking to you in this way.

Disciple: Thank you, teacher, for the reminder. How easy it is to forget our conversations and my experiences that took my awareness beyond this physical realm. How much easier it is to be reminded about the Truth in your presence. Yet you are not always beside me, and when the senses are bombarded by what appears as outside, (especially reading the news) it is hard not to fall into the trap of that reality.

Yama: It is only the senses that tell you I am not with you. Remember, I am traveling with you and every being. I am just not always appearing to you so you can play the game better amongst all your brothers and sisters.

I bowed to Yama.

Disciple: Please, teacher, my constant companion, help me with your words to remove the ignorance of how I am responding to these horrific events. My mind trembles at the thought of my children living in a world of growing violence.

Yama: The mind likes to see things in black and white, good and bad. That is how it maintains its separated sense, or its ego. And since the mind has the power of God it creates a reality that it calls real, to maintain its spurious notion of separation. What you are describing is a perfect example--black and white for the shootings; good and bad for the politicians (and all their finger pointing). And because the ego, that separated notion of the mind, finds strength by believing it is trapped in a body, or even saying it is just a body, it plays the victim as well as the victimizer. And wields  the weapon of fear to reinforce the idea of limitations.

But remember, no matter how fearful, how polarized things appear to be, the Truth is that the Unity of Spirit is always exerting itself in its patient and fearlessly knowing way.

I am sure you must have seen in all of this horror, as you say, some example of unification?

Disciple: I did. Let me show you.

On my computer I went to a video and clicked it on. We watched a group of black protesters cross a street in Dallas to greet a group of white protesters with the intention of removing the walls between them. Again tears fell from my eyes as they did the first time I saw the two groups hugging each other, praying together as one, with a policeman joining them.

Yama: Now, that is new. Such acts of unification are always new, free of the ghosts of the past, because Unity is always Now. There has never been a time when Unity was not.

Those tears that you are shedding is the Heart’s resonance to the Love that binds all things, that can never be touched by my hand in the role of Death.

I nodded, unable to speak, and took in Yama’s words, and the remembrance of the hugs (I felt those hugs as surely as they did, for there was no separation between us), and joyfully closed my eyes that tears gently fell from. And from my Heart I could feel the blessing arise from it and go out to all my brothers and sisters, throughout the whole world, barring none,in whatever role they were playing--the blessing of the knowing that “All is well.” Always has been. Always will be.

Posted by Triliving--Celebrating Truth, Beauty and Goodness at 12:04 AM