Sitting upon a Bank of the River of Life and Death

The Columbian River gently flowed by as I sat on its bank, little eddies appearing and disappearing. My mind at rest, watching, free, grasping nothing my eyes sat upon. I heard footsteps from my left crunching upon the stone beach. The sound does not disturb the openness of “my” mind, nor the knowing of who made the sound.

Yama sat quietly next to me. We both sat in the Silence that is unaffected by the sounds of the nearby freeway, the birds, the planes.

Disciple: Yama, the remembrance of the book Siddartha, by Hesse, just came into my mind; the scene when Siddartha sits by the river and hears the OM, and knows all moments of his life, and all those he had known, have all been part of the River—this OM.

Yama: Yes, there is great wisdom to be found in that book and in that allegory.

Disciple: I can see how one’s life is simply a stream of events, thoughts, people, doings, etc., all of it seemingly separate, but actually all of it nothing more than the Great River. All happening Now.

Yama: Good, you’re going somewhere that really is nowhere. Perhaps you are getting wiser.

Disciple: So where does death come into this? Where is it along the River? I have been studying the Bardo Thodol, known in the West as The Tibetan Book of the Dead. You say there is no death, but Padmasambhava, the enlightened founder of Tibetan Buddhism, passed on this science of dying. Surely, he was not delusional, but thought it important enough to bring forth those teachings.

Yama: How do you know he was enlightened and not delusional? Just because there are statues of him that followers worship, does not make it so. I am not saying that he was not, I am just reminding you that such “knowing” about people and things can never be certain, only believed in. But go on, I digress.

Disciple: So where can death be found in the River? And I know you are reluctant to say much about what happens when one dies, stressing to focus on That which is imperishable; still, is the Bardo Thodol accurate? And is it important to know, as Padmasambhava believed, to know what happens after death?

Yama: Let me try to answer these questions with an allegory. Remember allegories are not real; they do not express what is true, but only point at It. This allegory cannot be applied to every situation, just to your questions. Agreed?

Yama: Good. Imagine, if you would, a River such as before you, but instead of a few eddies here and there, you have whirlpools. However, these are not whirlpools that are stationary, but are moving down the River at various speeds. There is a multitude of sizes. The large ones are stronger, of course, sucking in more flotsam and with deeper points. The smaller ones attract less and penetrate to shallower depths.

I nodded my head once again. And as I did so I saw a different River before me. It had a soft glow and was crystal clear. And upon it were a multitude of whirlpools, like clusters of galaxies. I could see the points of each penetrating down towards the bottom of the River, like various tornadoes. I also saw many that had no surface vortex, but just a sub-spinning tube. I watched as these sub-vortices went along under water and then appear on the surface once more; travel a ways downstream, gathering flotsam and pulling it into its little depths, and then disappear once more. In fact, every whirlpool did the same.

Disciple: Are these whirlpools people and their journey through the River of time—being born, living and dying?

Yama: No, they represent that. The surface is what you call life; by each one’s thoughts, words and deeds, each gathers to oneself flotsam—flotsam that they themselves created.

I watched as each leafy-like object appeared before a vortex. And then saw that it split in two, one staying in the vortex, the other shooting off, to be pulled into eventually a near-by vortex. In fact, the River’s surface was covered with such matter.

Disciple: Why does each piece split in two?

Yama: Whatever one thinks, does or say, stays with one and also helps form the surface world in which one moves. Hence, the sage advice of the enlightened ones that if you want to change the world, change yourself.

Disciple: I can see clearly how those three can affect the world and go shooting off, but what does one do with that matter that get caught in the vortex?

Yama: Yes, the place of dreams. And of death.

Yama: When one dreams, or when one dies; or, for that matter, when one meditates or does activities, such as art, poetry, music and other artistic endeavors, one will view one’s thoughts, words and deeds, that are the building matter of their own little world. Here is what the Bardo Thodol is attempting to describe (in its cultural metaphors). When one dies one experiences one’s naked mind, which is basically created by one’s thoughts, words and deeds. If one’s life has been a shallow whirlpool, identifying with selective bits and pieces on the surface, death can be quite a shock, for every piece will be examined.

A question: Is the vortex the flotsam?

Disciple: Not at all.

Yama: Exactly. That is why the teachings remind the traveler through the land of death, that place of becoming, that all the images, whatever pleasant or frightening, are nothing but your mind.

Disciple: But what about when one first dies, that many describe as a great Light and which the teachings say one should move into for liberation, how does that fit into the allegory?

Yama: That Light is the remembrance of the Ocean, the call of its depths, where no vortices of flotsam exists. Where the River has always flowed into.

Disciple: Why doesn’t everyone go into that Light? From all accounts there is a Great Love that emanates from it, drawing everyone home.

Yama: Yes, it is beckoning for all to come home, to come to one’s Nature. However, the flotsam that has been accumulated, that has been grasped in self-identification, may be so much that it will quickly distract one away from the Light; or there is neighboring whirlpools, loved ones, who are creating more pieces with the name of the one who has submerged, that pulls the transitioning one away from the Light.

Disciple: Isn’t that why the Bardo teaching emphasizes that grieving survivors can be so detrimental on the newly deceased.

Yama: Yes. While grieving comes to even the enlightened, when it becomes prolonged, is grasped, it creates more flotsam for everyone—the grieving and the deceased. Additionally, when one has done a lot of ill, survivors will most likely speak ill of the deceased, which causes more flotsam, more images to contend with, and that will not be pleasant.

Yama: Think of each piece as a mini screen, or better yet, a bubble, to keep in line with the allegory of the River. Across the surface of each bubble are visions and voices, demanding to be seen and heard. And in that submerged place those bubbles seem very real.

Disciple: What about sending good thoughts to the deceased? Does that help them on their way?

Yama: Prayers, rituals, reading inspiring works while thinking of the deceased, speaking in gratitude of what they did, blessing them on their way without grasping, creates beautiful bubbles that help alleviate any suffering. Without suffering one can be clearer and at peace. Which helps in gaining understanding.

Disciple: Okay, I think I am getting the picture.

I again looked at the River and saw these bubbles in each of the vortices, all with images flashing about.

Disciple: Do these bubbles eventually pop?

Yama: Of course they do. All things created must end. Some bubbles last longer than others, or at least appear to. Watch.

My gaze was directed to a vortex that had a multitude of bubbles. And it seemed that time slowed down. I watched some bubbles disappear, and in their stead, a space was left; while with some bubbles an exact duplicate would replace the one that had popped.

Disciple: Yama, why are some being duplicated?

Yama: Those are hard-held beliefs. And whether they are pleasant or unpleasant they are distracting.

Disciple: I noticed, Yama, that some vortices are longer and deeper. And some so deep they reach the golden bottom. Please explain the differences and what is the bottom and what is it that is between the tip of a vortex and the bottom. I see that very few actually touch the bottom.

Yama: Enough words. Nothing is better than experience. Take my hand.

I took his outstretched hand. Then he took my other as we stood. He looked into my eyes and smiled. And then with a cry he jumped, pulling me after him.

We plunged into the River feet first. But there was no cold for which I had braced myself. There was not even a wetness. As we descended a host of bubbles, caused by our plummet, danced around us. I gasped as I focused on them. Each bubble was a scene from my life—some that brought smiles, other grimaces. Faces of people as well. Most of them known—not all appreciated. Others a vague memory was attached to them—passersby perhaps or authors of simple kind deeds I may have received from them. 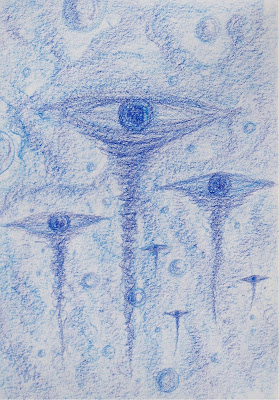 Up they rose, popping along the way, while down we went. Now the bubbles were not merely pleasant/unpleasant, they were horrific. There were scenes that I could not recognize or faces. Such hatred. Such acts of cruelty. Such malice. Each bubble vied to draw me in, and as they did so, the bubble would grow (or did I shrink?). I began to panic and tried to swim to the surface.

Yama held tightly and looked me in the eyes. His calm gaze steadied me. I relaxed.
We descended. And came at last to the bottom. There was no debris, sand or anything upon it. It was just solid bedrock. Pure gold.

Yet touching it, my mind, with all its questions about the bubbles, especially the lower bubbles, or any part of the descent, came to a complete rest. Bubbles swirled around us, but I gave them no thought, no energy.

And then my/our awareness shifted. There was no point of standing upon the bedrock, but of being the bedrock, the foundation—the current, the bubbles, the flotsam, all going by, going to and going from. None of it touching the bedrock. Not even the Ocean itself touched the Bedrock.

And then there I sat on a bank of the Columbia River. Quietly, I watch the eddies appearing and disappearing, and then heard footsteps upon the stone beach. I looked to my side and saw Yama join me as he sat down. He flashed a rather large grin and a sense of déjà vu came over me.

Yama: Do you have any questions?

Posted by Triliving--Celebrating Truth, Beauty and Goodness at 6:12 PM

Email ThisBlogThis!Share to TwitterShare to FacebookShare to Pinterest
Labels: Bardo Thodol, Life after Death, OM, The Bardo, the subconscious, The Tibetan Book of Dying