I am sitting in front of my computer screen, looking at the headlines for the day in the news. Yama stands over my left shoulder. I shake my head as I read more about the terrorist attack in Brussels and the politician mud slinging.

DISCIPLE: (I mutter) The world is going to hell.

DISCIPLE: What do you mean by that? Just scan the news. We have a politician who is speaking the most hateful things about people, who lies blatantly, who divides the world into those who support him and those who are against him, who wants to build a wall to keep the undesirables out, who incites violence, and who embodies the worst of capitalist greed by winning at any cost. And the thing is so many people buy into his distorted vision.

DISCIPLE: Then there is ISIS. A fanatical Islamic group that has brought shame to millions of Muslims, not to mention terror, who want the world to turn back to the dark ages, where people are killed or tortured if they do not follow the Islam they espouse. They have attacked again in Europe and are causing a huge backlash against the Syrian refugees fleeing their war-torn country, all of which is sowing more seeds in the European political soil for fascism to rise once more.

YAMA: And this is new? All these acts of hatred? All of this violence.? All of the finger pointing?

DISCIPLE: Well, no, it’s not new. Since recorded history we have been doing this violence to each other. It just seems worst.

YAMA: Has it become worst? Are things not better since the feudal times? Or even from the industrial age? Or from perhaps even the 50s? Of course, when we say better what are we referring to?

DISCIPLE: Happiness? More people who are living a better life?

DISCIPLE: Those certainly help, I can’t deny that.

YAMA: Yet, how many people are truly happy in your society, even when they have the nicest car, or the house of their dreams, eat the best food? How many of them are without fear?

DISCIPLE: Probably none, or a small handful.

The two examples you just mentioned, what do they both utilize in the way of pushing their agendas.

YAMA: Exactly. Both are showing the fear that is the foundation that the world of humans have created. They are bringing forward what has been lying in darkness for many. And while it may not be pleasant, it is needed.

DISCIPLE: Why? They are causing undue suffering to thousands, or threaten even more harm.

YAMA: What they are doing is not right action, this is very true, for right action always leads towards ultimate unity. But it is not to say that Spirit is not using all of this to bring awareness and awakening since this path has been chosen. Every act is utilized to bring humanity towards wholeness. That is why I asked you earlier has things improved on this planet. Is there movement towards unity? Are there more people awakening to the remembrance of who they really are, and not who they think they are?

DISCIPLE: (Taking a deep breath) Yes, I must admit there has been change towards unity. Countries are connected in a global way that has not been seen: whether it is through the Internet or economically, or with alliances. We have the United Nations. We have World Music. We have dialogues with the major religions and there has been a lot of work with them on finding common spiritual ground. The more we travel to space the more we have an opportunity to look back at our planet and see it without artificial boundaries and with an appreciation of what a wonderful world we have and must take care of.

YAMA: The Internet that you mention, like many things on your list, can be used to divide or unify. The forces of fear can use them quite effectively. They love to use drama, where there are the “good guys” and the “bad guys.” It is very easy to get all rapt up in the drama that is played out on the screen. And in doing so one forgets the beauty, the good, the true. The Internet is a manifestation of the one mind that connects everyone, no exceptions. You must be mindful of what you put your consciousness on, just as you must with your thoughts as you move through the day.

DISCIPLE: But I don’t want to just hide my head in the sand and be pollyannaish. I am a teacher and need to be educated in the happenings of the world, not to mention bringing change for the better.

YAMA: Of course, you should not be in denial. However, the first denial that you should be vigilant towards is the denial that you and every human being is a Spiritual Being that nothing in time can ever touch. When you are not in denial of that than you can study and act wisely. If you are in that denial than all your actions are but reactions out of fear.

When you see something like people being hurt, who are in distress, breathe in their pain and then send them the thought: ALL is truly well--That they are as God created them. And when you see your brother acting in divisive ways, do the same. He is as God created him. See through the Eye of Eternity in all that transpires. Step away from the drama.

DISCIPLE: But shouldn’t I go and do something. Give money. Protest?

YAMA: If from your Still Place, from that place of wisdom, there is a call to do something like that. Then do so. But if you are not acting from that place you will be like those protestors who are yelling at the others that they should not be hateful. Just more drama. 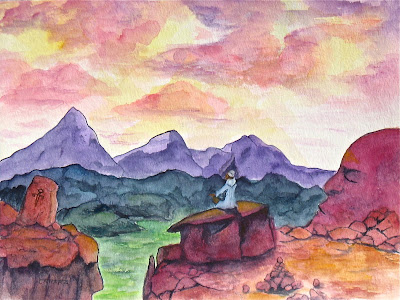 With more breaths, I nod and close my eyes. I imagine the politician, and then the other politicians, and breathed them all into my Heart, and say to them all: “You are as God created you.” None of them more than the other. Then I send a blessing to all those in Belgium, and those in Turkey, and in Syria, and in Iraq, in Israel, in all of Africa, and in all the world, who have suffered terrorism, and then to all those who have inflicted those hateful acts. And then I see all of them rise from the earth, now feeling free, rising higher, becoming closer together as though they were moving up in a pyramid of light. And then every one of them merging into the Eye of Eternity. And out of the Eye a single tear drop emerges, and then rains down upon all of us on earth, the rain of compassion. And I can feel Yama’s hands on my shoulders. I open my eyes, the tears splashing my keyboard.

YAMA: All is well...
Posted by Triliving--Celebrating Truth, Beauty and Goodness at 5:21 PM