Learning to Hiss (When to Use Anger)

We stood outside an African village as two old holy men. There was a great commotion and wailing. I followed Yama as we pushed through a crowd of people who were trying to glimpse what was transpiring in a hut. Upon a bed lay a young girl whose leg was swelling and discoloring horribly. Her eyes rolled up in her head and she gasped for breath. Family members lamented.

Yama pushed his way through and placed his hand on her leg and heart. Immediately she calmed down. “Look, the leg!” cried the father.

The leg began to return to normal.

“Let her rest. She still has a long life ahead,” Yama said in a reassuring tone.

After an abundance of crying in gratitude the family informed us that a cobra that lived near the river had bitten the girl. We soon departed after feasting and made our way to the river. “It should be around here,” Yama said. “There it is.”

An enormous cobra lay upon the trail in front of us, coiled, hood raised. Yama , unflinchingly, strode up to the serpent. As Yama neared, recognition came to the creature.

“Perhaps. What you did was not right action. The girl meant you no harm. It was out of spite that you struck her.”

“You speak truly , O King of Death. Command me and I shall do it.”

“Very well. You shall bite none as your penance.”

“I will drink only water and milk for the rest of my days,” hissed the cobra before bowing and slipping into the brush.

“What will happen to the cobra?” I asked.

“We shall see. In the meantime let us close our eyes to this dream. Letting all images, all thoughts, slip past our awareness and rest only in That, in that timelessness, unrestricted by any space.”

Then I heard a sound, a whisper. I had an ear. The words fell into this ear. Then more Awareness. I had a whole body. And when I opened my eyes I saw Yama, still an African holy man, beckoning to me. “Time to check on our friend, the cobra.”

Yama laughed and said, “Do you always trust in your sense of time? It is too capricious for that.”

We came to another part of the river. A small group of children were jumping up and down, yelling, laughing and throwing sticks and stones at something ahead of them.

“What are you children doing?” I said to some of them.

“We are making sport of the snake that is more like a worm,” replied a boy.

As we made our way through this little throng we saw the cobra, its body looked emaciated, covered with scabs and bleeding cuts. Stones and sticks flew at it as it timidly hid its head in its coil.

“Go!” shouted Yama to the children as he raised a stick. The children all fled. After they had disappeared, just as we were moving closer to the snake, two young men strode up. “Here it is, the worm-snake,” said one of them. “Watch this.”

He grabbed the tail of the cobra to the horror of his companion.

“Careful, it will strike you!” the other cried.

“I told you, he is no serpent. It is a worm.” Around and around he spun the cobra, holding it with both hands, spinning like a macabre wheel. The other man started to laugh at the sight of his friend twirling the beast. Then the man let go of the tail and off flew the cobra into a tree, where it slid down stunned.

“You are brave to do that,” said his friend to the antagonist. “The women will love the story of your feat.”

“You are right. Let us go and tell the tale.” And off they went.

We walked over to the barely moving snake. “Yama,” it barely hissed, “I have harmed none for seven moons now.”

Yama gave me his all-knowing look. He kneeled down and put his hand on the twisted body. “Silly fool of a snake. I asked you not to bite any creature. I did not ask you to become a weakling, a worm.”

“I do not understand, Great Yama,” replied the cobra.

“By becoming a weakling you have caused as much harm as your biting out of spite.” I looked aghast at Yama.

“Forgive me,” said the snake. “Please, Master of all creatures , tell me how.”

“By becoming timid, and not being firm, you become a depression on the earth for the stagnant waters of hatred and violence and rage and cowardice to find a place to find a home. Such timidity encourages others to wrong action.”

“But what should I have done?”

“Just as I yelled at the children to be gone, not for my personal gain and without any anger towards them, I did so to keep them from doing wrong action— from harming themselves by harming you.

“Hiss, my child. Rise royally as the king of all serpents that you are, spread that hood in mock anger, and laugh at life’s joke as they run away, those that would do harm.”

The cobra kissed Yama’s feet before it slithered slowly away. As we continued walking, I said to my constant companion,

“I would love to see the faces of those who will try to harm our cobra.”

Just then, three young children came screaming down the path towards us, tears lining their faces. “Run! Run! A cobra tried to kill us!” 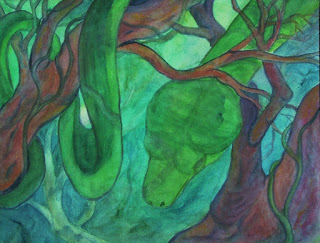 We laughed heartily as they sped on by crying for their parents.

Stagnaro, Janaka (2015-04-02). The Teachings of Yama: A Conversation with Death
Posted by Triliving--Celebrating Truth, Beauty and Goodness at 9:28 PM